Notes courtesy of Elsa, who even checked the tune names. Thanks, Elsa; thanks, Myles & Ben, for taking on the MC duties. Fifty-three dollars was collected, which means, per our new convention, $40 for the church and $13 for the singing’s slush fund. I’ll deliver this along with whatever we collect in March. Song choices unusually well-balanced among the books, at SH 20, CB 14, ShH 17, for 51 total songs.

A smaller, but highly enjoyable singing. Find for the month: ShH 33 FLORILLA. Sorry I haven’t made minutes for the last quarter of 2019. I thought I might do a spreadsheet for all five singings but just doing the SH calls and then fussing with the format nearly bored my fingers off. So unless people really care I’m not doing the ShH and CB, but I’ll post the SH sheet somewhere.

Two important notes: (1) The class agreed to a new way of handling the collection. Instead of my retaining it all, borrowing $5 here and there for cups and the like, and then writing a check each quarter, every month the first $40.00 will go to the church; any amount between $41 and $55 will be kept as a slush fund for tea, cups, new books, tape, or whatever the singing needs; any amount over $55 will be added to the gift to the church. I’ll leave envelopes for the slush fund and the monthly donation and reflect this update on the BK singing instructions page here. This month we collected $39, so it all went into an envelope and under the door of Fr. Wallace’s downstairs office.

(2) I won’t be at the singing in February, so am asking for a volunteer to be in charge. I’ll get the key to you. Very excitingly, Myles and Ben have offered to host the after-singing festivities which will feature the PECULIAR GROUND role-playing game created by London singer Francis Gaskin: https://drive.google.com/file/d/1U3k4PZC4o_KCtDmvZgqXyb1eBVt1cmfG/view. LET ME KNOW if you can be the key-holder and cleanup-checker on February 9.

Other news: there’s now a key on a long cord that can be tossed out the window to latecomers and hauled back up.

Big Singings, a Guide for the New Singer

Thanks to friends on FB for the recent thread on this subject which confirmed and added to my thoughts, especially Margaret Bradshaw’s mention of book-on-seat etiquette.. Additional comments are welcome. I’ll see if refinement is needed and can then put this out in another form, probably as a Google Doc. It’s two full pages as laid out.

THE BIG SINGING: A Guide for First-Timers

EXECUTIVE SUMMARY: Bring food; sign in; move around; be ready; help out; enjoy.

A big singing may be an All-Day Singing (one day) or a Convention (more than one day). Only minuted* sessions count; added activities like a night-before singing school or a day-after regular singing don’t convert an all-day to a convention. At either, singing will run from morning till mid-afternoon (typically 9:30 to 3:00 or 10 to 3:30) and will include a potluck lunch known as Dinner on the Grounds. There will be one or two breaks in the morning, making two or three sessions, and one or two sessions in the afternoon, with as many as 90 songs.

*Big singings from the Denson Sacred Harp report leaders and song choices along with other basic information to the Sacred Harp Publishing Company in the form of minutes. The information is tabulated, printed, and available online.

WHAT HAPPENS AND WHAT DO I DO?

I. Before the singing

If you are a local, and you are able, please bring something for Dinner on the Grounds (or breakfast). A main course would be great but snacks, bread, dessert are all good; you do not have to make it yourself and it doesn’t have to be large or fancy. I have never known a box of donut holes to go unmolested. If you want suggestions, talk to the Food Chair, who may have an idea of some of the dishes already planned, and will also know whether there are facilities for chilling or heating up food at the venue. Also, be aware that many people find it fun as well as traditional to dress up a little.

Registration usually opens about half an hour before the singing starts. Whenever you arrive, at the REGISTRATION DESK, fill out a registration card with your name, your address (town or city is fine), when you’ll be there (morning and afternoon), and whether you would like to lead. YOU DO NOT NEED TO LEAD. If you aren’t ready, you don’t want the anxiety, or you just don’t feel like it, there is no dishonor in saying No. If you want to lead, see below for advice. Fill out a nametag and wear it. Pick up a loaner if you need one. Get some coffee. If you brought food, put it where instructed. Put your bag, coat, etc., out of the way.

Figure out where your part is sitting and find a seat for the first session. SEATING GUIDANCE: Singers will move around between sessions so that everyone who wants to gets a chance to sit on the front bench. If you are not an experienced singer, don’t take the middle seats on the tenor front bench, but otherwise you should feel free to sit up front for a session. A book left on a seat during a break is a marker: don’t move one, but also don’t leave your book on a seat you aren’t returning to.

III. During the singing

Remember that registration card? The ARRANGING COMMITTEE is responsible for calling singers to lead. Using the cards to plan the flow, they call each leader up to the square and announce the next, who then has one song to get ready.

PRAYERS AND SPECIAL SESSIONS: There will be three or four prayers offered during the day: after the first song calls the class together; before lunch; to close the singing; and if there is a Memorial/Sick & Shut-Ins lesson. There may be a BUSINESS MEETING to formally elect the officers of the singing. The MEMORIAL LESSON generally falls shortly before lunch, on the second day if it’s a two-day singing, and it honors members of the singing community who are unable to come to singing and those who have died in the preceding year. The TREASURER’S LESSON will come early in the day. You can make a contribution then or put it in the container which will doubtless be on the welcome table. Whatever you can give will be accepted with thanks and goes to the expenses of the singing (the venue fee, equipment for lunch, and similar).

HELPING: If you want to help during the singing, see the Food Committee to help with lunch or just pitch in with setup and cleanup. If you brought food, follow the Food Chair’s instructions as to setting it out. There will be utensils you can borrow.

GENERAL: Have fun singing and listening, watch the leaders as much as you can, remember to rotate benches, leave or take a break if you’ve had enough, try not to forget your water bottle.

The chair will speak and there will be reports from the Secretary and the Treasurer. A RESOLUTIONS COMMITTEE may offer general thanks and a resolution to meet next year. Announcements of singing events will be made. The final song (often 62 PARTING HAND, but not always) will be sung standing, even milling around and shaking hands or hugging – a tricky moment for new singers who may never have had the chance to sing this song. A prayer of dismissal closes the singing.

At NYCADS, the singing is often followed by a composium, an opportunity to sing newly composed songs and offer feedback to the composer. There will generally be a SOCIAL of some kind in the evening.

LEADING AT A BIG SINGING – advice for new singers
• Have two songs you are prepared to lead, ones you know well so you can enjoy them. (Two, in case one is used before you are called.) You will not be judged on the rarity or complexity of your song. Simple and popular songs are great.
• Be efficient. When you hear your name called as the following singer, get out of your seat and to a corner of the square if you can. While the previous song is going on, find your song in the book. Decide which verses you plan to lead and whether you want to take a repeat. Remember that it is better to leave the class wanting more than to wear them out, and that there are many other leaders who need time.
• When you’re called to the square, come up as quickly as you can and say the number of your song loudly and clearly. Look up rather than at your book when you say it.
• Let the pitcher key your song.
• If you prefer to sing a line other than tenor, let the tenor front bench know.
• Announce your verses before the notes (or after) and use your fingers if you can to remind the class of your verse numbers.
• The front bench tenors are your team for the length of your song. They will help you and give you back the energy of the square. Look at them and use them.
• When you’re done, relish the sound and the experience BRIEFLY and then scoot on out of the square. Get some more coffee if you want, maybe one of those donut holes you brought.
N B Mandel 9/18/19

St. Paul’s Church, Carroll Gardens. Singing from The Sacred Harp, Denson 1991 (SH) and Cooper 2012 (CB) Editions, and from The Shenandoah Harmony (ShH). As always, let me know if I mistranscribed anything and I’ll correct it.

Thanks to all the singers who came out and came over for sangria.

A very enjoyable singing graced with the rare presence of our old friends Eric and Sarah H and new friend Eliza the Baby, and I was thrilled to have so many folks come over afterwards for Ice Cream Social, with upstairs singing and late deck time. I recommend an ice cream party to anyone who wants to spread pleasure among her friends in a child-safe manner. Although we did, of course, have drinks, so. And thanks to everyone for generously managing the door-opening system that will be standard from now on. We will miss Stefani’s FRIENDSHIP here but wish her a wonderful time in grad school. (Does that even make sense? Yes, yes it does.)

Collected: $45, plus $50 for one copy each SH and ShH, of which I’ll save half for our New Edition fund and Myles will sell me a replacement ShH.

I can’t claim I didn’t have time, but I didn’t get around to filling in the tune names. I’ll come back to it. Meanwhile, have fun seeing how many you can name!

Brooklyn Shapenote Singing, June 14, 2019. St. Paul’s Church, Carroll Gardens. Singing from The Sacred Harp, Denson 1991 (SH) and Cooper 2012 (CB) Editions, and from The Shenandoah Harmony (ShH).
The room we sing in is handsome, with its Gothick leaded casements, and sounds good. But it’s a little dim, especially in winter and in the center of the square, since the elaborate chandeliers are spaced close to the edge, and there were quite a few bulbs out on top of that. Several months ago I mentioned it in a note to the rector, but nothing was done. So this month I brought some bulbs. And Paul brought some bulbs. And Myles brought some bulbs. And meanwhile, the bulbs had been replaced!

Collected: $63. Thanks for your generosity. 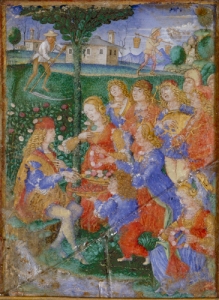